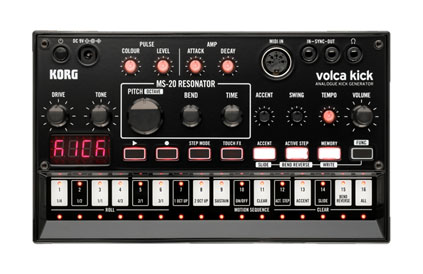 The volca series has consistently brought renewed attention to classic groove machines and historical synthesis. It now has a new focus. This time, it's the most important sound in dance music: the kick.

The volca kick is an analogue kick generator that's made for sound design. An analogue circuit based on the powerful resonant sound of the original MS-20 filter, it lets you create a wide range of kick sounds only possible through analogue circuitry, ranging from solid kick drums to crisp kick basses. The 16-step sequencer, a distinctive feature of the volca, now has a new Touch FX feature that lets you control an effect instantly, giving you even more live performance potential. Experience the stunning power of an analogue kick that cannot be obtained from a plug-in or a sample.

The volca kick generates powerfully present kick sounds using a completely analogue circuit. To create those sounds, it uses not a typical sine wave, but the sound of an oscillating filter from the original MS-20. The powerful Rev.1 filter of the MS-20 self-oscillates when resonance is increased to the maximum, and this is used to produce powerful kick sounds with complex overtones.

Simple and effective parameters are provided, allowing you to freely design a wide range of kick sounds to your taste. Start the sound design process by using MS-20 RESONATOR (PITCH/BEND/TIME) to control the sense of pitch that generates the "body resonance" of the kick sound. Then use PULSE COLOUR/LEVEL to adjust the clip components to control the sense of attack, and AMP ATTACK/DECAY to intuitively control the decay of the sound. From tight kicks to fat, slow-decaying kicks, and pitched kick bass, it's possible to create kick sounds that are appropriate for every type of dance music.

In addition to the analogue kick generator circuit based on the MS-20 filter, there's an analogue drive that includes multiple stages of distortion. The distortion level and type can be varied by a single knob, increasing the variety and power of the kick sounds. You can use the tone control to transform the character of the sound by adjusting the high-frequency range.

The volca kick is not just a kick drum machine. You can use the 16-key touch-panel keyboard to perform dynamic kick bass, and take advantage of the volca kick's powerful analogue circuitry to generate the sub bass sound that's indispensable to dance music styles such as grime or trap. Since the volca kick covers a wide pitch range from low- to mid-frequencies, your sequences can include a variety of sounds including low tom, high tom, and sound effects. 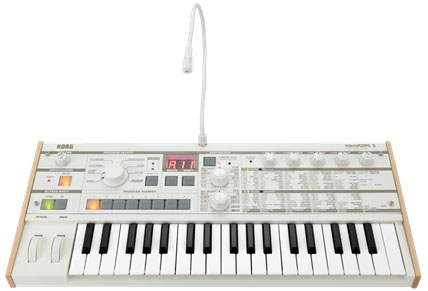 With a serious sound, ubiquitous design, and superior build quality, the microKORG analog modeling synthesizer became an instant world standard when it was released in 2002. Since then, the microKORG has found its way into the hands of musicians far and wide, and now, receives an update to ensure it will remain one of the world's most beloved synthesizers for years to come.

The new microKORG S features a built-in 2+1 speaker system with power that far exceeds its size. Its body sports an elegant white motif, and features new presets that represent the sounds of a new generation. Beneath the microKORG S's sophisticated exterior hides a sound engine both brutal in strength and universal in application. 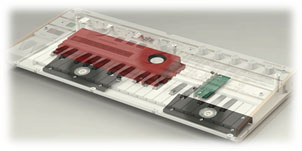 Inside that compact body of the microKORG, we've included a carefully constructed speaker system consisting of stereo speakers with clear imaging, plus a woofer that emanates a startling amount of low frequency. The chassis uses a new box structure, and the combination of ample box volume and a bass reflex port takes full advantage of the speakers, thereby delivering a rich sense of volume that exceeds the size of the speakers, a clear sense of positioning, and a rich low-frequency range. In addition to the battery-powered operation of the existing model, the inclusion of the built-in speakers allows an easy yet full-fledged performance experience even in an environment where there is no power supply or PA.

Since the speaker box is contained within the chassis of the instrument, the vibrations from the speaker can be felt through your fingertips. This tactile feedback allows you to experience the same subtle and dynamic response as when playing an acoustic instrument or electric
piano.

The memory capacity has been increased from the original microKORG. Mainly centered on simple and present sounds that shine on stage, we've added 64 powerful preset programs that meet the needs of the changing music scene, including clearly defined and punchy leads, electric pianos that sound great in an ensemble, and powerful and solid basses. In addition, we've also newly provided 64 additional slots for user programs, so you can save your own original sounds without overwriting the presets. This encourages a sound design process that's ideal for this instrument: select a sound that you like, and edit it.

There's a new Favorite Select function that lets you assign up to eight of your favorite programs. Since this lets you instantly recall the sound you need, it makes live performance even more convenient.

Find these at your nearest KORG dealer.