Adelaide's O-Bahn tunnel officially re-opened this week, after an extensive upgrade that makes it one of the world's smartest tunnel systems.

The O-Bahn uses cooperative intelligent transport systems (C-ITS) and civil construction to improve travel times and reliability for users. Working for main works contractor McConnell Dowell Australia, SAGE Automation delivered the C-ITS technologies that communicate to the tunnel's control systems and provides benefits to bus services, for example:
Vehicle to vehicle communication: On-board hardware installed in all O-Bahn buses gives bus drivers real-time alerts when they are travelling too close (or too fast) to the bus in front. This system can communicate with other equipped buses up to 300 metres away reducing the chance of collision. Vehicle to infrastructure communication: Road-side sensors at either end of the tunnel detect which vehicles are authorised to use the tunnel and communicate with traffic lights at the O-Bahn tunnel's entry.

When buses queue too far back, detector loops trigger green signals to allow buses through the adjacent intersection, reducing congestion for other motorists in the intersection.
Unauthorised vehicle detection: Road-side sensors detect every vehicle approaching the O-Bahn tunnel. Only buses with the on-board hardware installed will be allowed to enter the O-Bahn tunnel.

SAGE installed and integrated the tunnel sensors as well as delivering the other ITS and Operation Management and Control Systems (OMSC) and Plant Management and Control Systems (PMCS).
SAGE also manufactured the Main Distribution Boards at its Advanced Manufacturing Facility at Tonsley Innovation Precinct.
While the ITS technologies remain invisible to commuters they are the key to solving congestion on our roads.
"It's a huge credit to all involved in this complex infrastructure project," Transport and Infrastructure Minister Stephen Mullighan said.
"The tunnel is a critical piece of infrastructure which will make bus trips on our busiest public transport network faster and more reliable, while also freeing up more road space for cars and other vehicles, particularly on the Inner City Ring Route," he said.
The upgrade was part of the State Government's $160 million O-Bahn City Access Project and is expected to reduce travel times for the 30,000 people who use the service every day.

Integrating the technologies of tomorrow with current infrastructure is one of the biggest challenges road authorities face. SAGE engineers, manufactures and integrates connective data solutions for Addinsight the South Australian Department for Planning, Transport and Infrastructure's traffic intelligence system that provides real-time road traffic analysis of probe data from Bluetooth, WiFi and other sensor technologies.

PUBLIC ADDRESS SOLUTIONS FOR TUNNELS
VA (Voice Alarm) or PA/VA (Public Address/Voice Alarm) audio systems are now common place in large public spaces & transport facilities. A well designed and commissioned system can provide a highly effective means of communication with the public. The primary purpose of such systems is to communicate information when an emergency arises, thus clarity/intelligibility is of the utmost importance, so that people can move to safety as quickly and effectively as possible. To achieve this, an STI (Speech Transmission Index) of 0.45 to 0.5 under all conditions is recognised as the minimum desirable standard. Furthermore, the system should have a configuration which is sufficiently robust to make individual component failures tolerable. In addition, comprehensive monitoring of the status of all system components, fault logging and reporting, a method of storing standard emergency (and non-emergency) announcements, a flexible set of audio processing techniques, and a simple, centralised point of system control and monitoring are all clearly desirable. 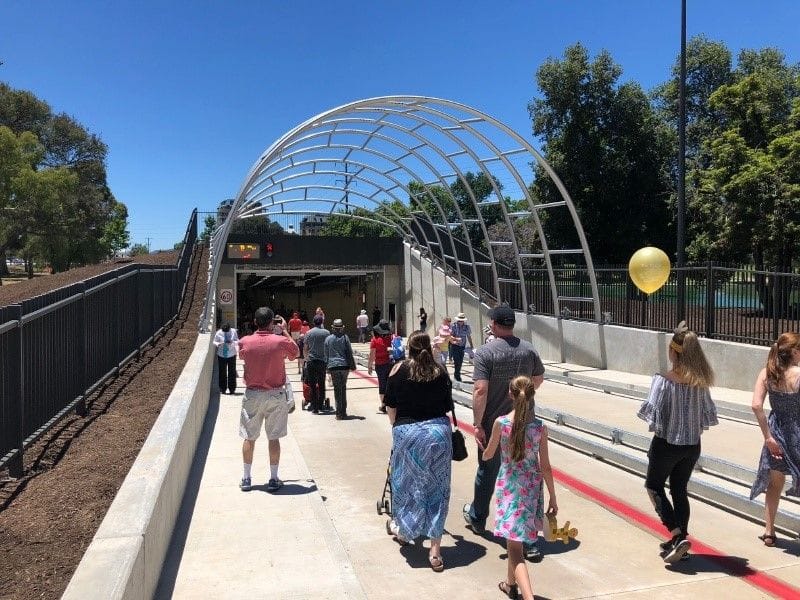 The O-Bahn was open to the public on Sunday 10 December before officially running bus services on Monday. Image: Sage Automation 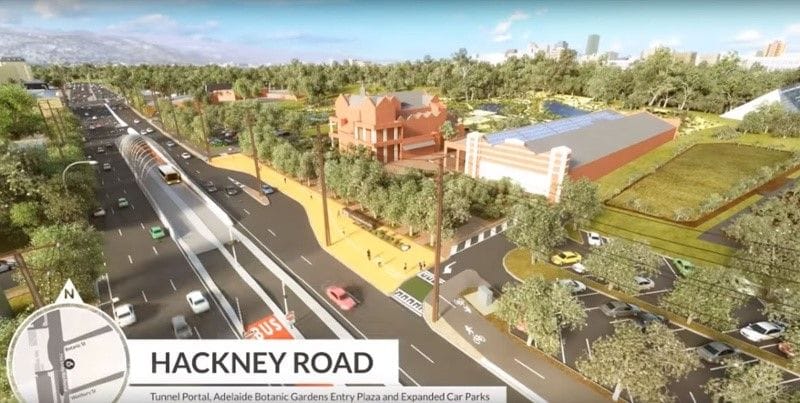 Initial planning and design of the O-Bahn entrance and surrounds. Image: Department for Planning, Transport and Infrastructure 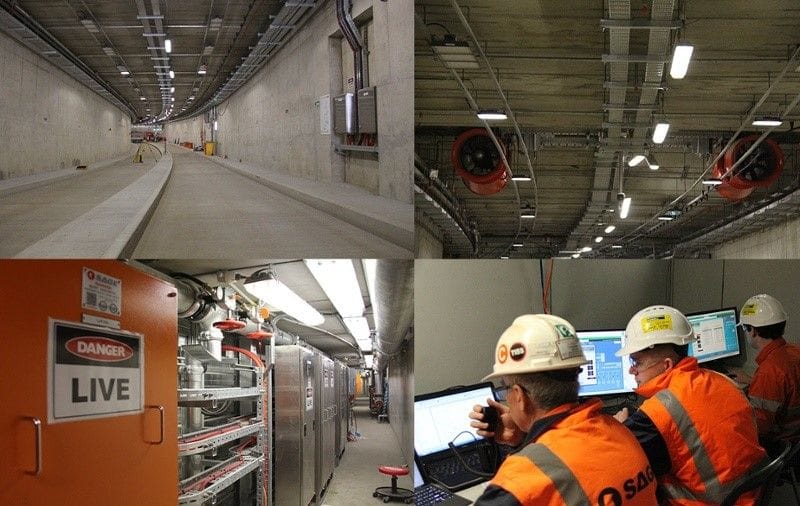 Behind the scenes: Installing and comissioning the cooperative intelligent transport system in the tunnel. Images: SAGE Automation 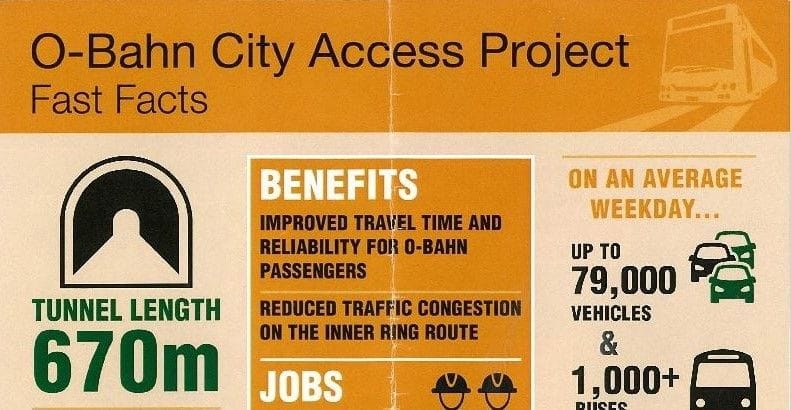 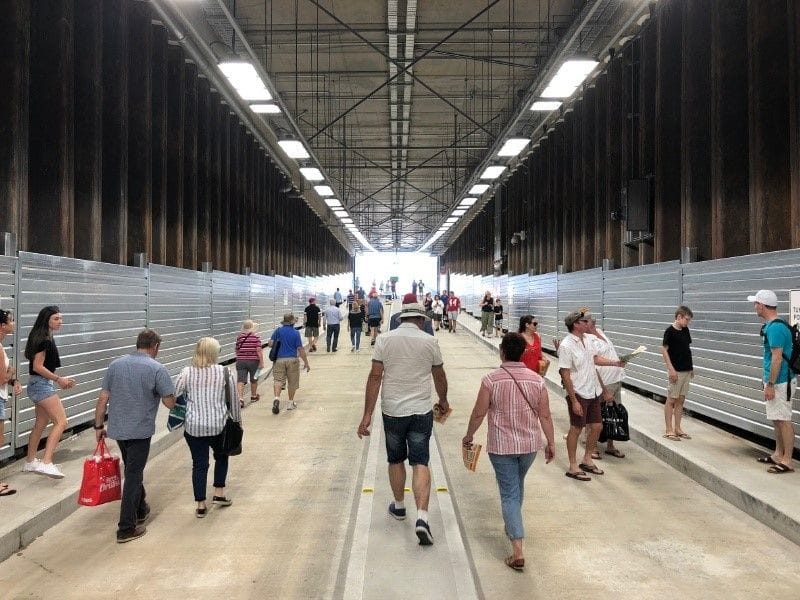 O-Bahn Open Day: People walk through one of the world's smartest tunnels for the first time. Image: SAGE Automation